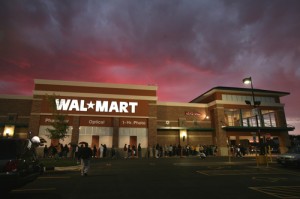 Walmart, as America would have you see it.

And when I say, “America,” I am really saying, “American Haters of Walmart,” but that’s kind of long, so I’m just going to say, “America,” and you can sort it out amongst yourselves whether I am talking to you or against you. But back to what I was saying –

Dear America. You have long protested the rise of the evil empire that is Walmart. You cite their poor treatment of their workers, their destruction of local economies, their undercutting of US manufacturing. Look, America, you’re not wrong. When you say these things, I agree with you. Wholeheartedly. But here’s the thing America. Walmart does something for me that you do not.

Right now, America, as I type this, I am wearing a tank top that is labeled a size 4. I bought it yesterday at Walmart, and it is not tight, America. I probably could have gone to a size 2, just for the entertainment factor. Do you think this tank top would be labeled a size 4 at Ann Taylor? No, America, it would not. It would probably be a size 10, maybe 12. You know what it would be at Guess? An XXX-Large. So what happens if we get rid of Walmart, America? Are you going to come to my house and cut out all the size labels on my shirts and pants, and replace them self-esteem boosting size 4? Because I like feeling thin, America, and I’ve seen your magazine covers and your television shows. You want me to feel fat. Walmart vertiably insists that I feel thin.

A picture of me, at the Walmart.

Alongside my size 4 tank top — which, for the record, has an ugly Hawaiian print, but it was a size 4, and I was buying it, by God — there were several other tank tops in a variety of colors. Grey and white striped, different shades of grey stripes, plain pink, a red and white bandanna looking thing that was very Fourth of July, and a variety of other options I’ve since forgotten, even though it was yesterday, and I actually bought them. Thing was, there were so many choices, and I couldn’t figure out which varieties I liked best. And then I realized, THEY’RE TWO DOLLARS EACH. And like Scrooge McDuck diving into his pile of gold coins, I went hog wild and bought all the colors I liked. My ugly size 4 Hawaiian print shirt was a pricey four dollars, bringing my grand total to SIXTEEN DOLLARS.

I’d stopped by Walmart on my way to feed the horses. I was therefore dressed in ancient jeans, falling apart paddock boots, a dirty Smarty Jones ball cap and a purple t-shirt I got in 2003 for free at a bar. And yet, America, I was one of the most beautiful women in all of the Walmart. If we lost the magic of the Walmart, America, where could I go, wearing that outfit, and still feel beautiful? I’m waiting, America. That’s right, there is no other answer to that question. Walmart is the only place where that kind of magic happens.

And this is to say nothing of the additional feelings of well being I find at the Walmart. Never do I feel so cultured, civilized, and benevolent as I do while at the Walmart. After all, I have never called a child stupid and then spat on the floor in public. But there are people who have, and they’re at the Walmart.

So the ball’s in your court, America. You want to see the destruction of the Walmart. I want to feel thin, rich, and beautiful. You find me a one stop shop that can reliably produce such feelings of well being, and I’ll side with you. Until then, I am with the magic of the Walmart.

One thought on “In Defense of a Sino-American Institution”