We have six inches of snow on the ground, might hit seven by 1pm, at which point the weather people say this will turn to ice. Ice = Complete and Utter Destruction. Last time we had an ice storm, we were without power for three days. I called the power company and told them we have seniors on our street. They could’ve cared less. I called them a day later to tell them we had a live power line down, with people driving over it. They appeared within the hour. I don’t know why I didn’t lead with the live power line.

Anyway, I wanted to get a second Freddy Joe Bedtime Story out into the ether before the Icepocalypse hits. (Ack! As I wrote that sentence the weather changed from white, fluffy flakes to ice! Noooo!!! And it came an hour and a half early!!!!)

This story is dedicated to Kat Owens, as it is entitled, “The Insect Collector.” Please visit Kat’s blog, and also please know she isn’t a sociopath! And in fact is quite a nice lady. : )

Once upon a time, there was a boy who collected insects. It was his all consuming passion. Everyday, he’d harvest as many bugs as he could find. It didn’t matter whether they were a new species, or one he’d already collected. He brought in everything he got his hands on, because what he enjoyed most about insect collecting was pinning the bugs to his display board. 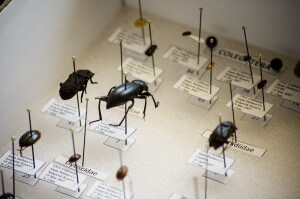 He’d take the day’s haul to his bedroom. The bugs, still alive, would scramble against the glass jars and plastic boxes he’d put them in. But their struggle was all for naught. One by one, the boy would pluck the insects from their clear cages and pin them to the board. Their many legs would wave feebly for a few seconds and then they’d go still, never to move again. The boy liked watching the life leave each insect, and he wouldn’t pin the next until the first had died.

In this way, the boy amassed a giant collection. It was so vast and varied, even scientists were envious. A professor asked if could borrow the boy’s praying mantis collection for a study, but the boy refused. He liked his insects where they were, displayed on his bedroom walls.

The day he denied the professor’s request he suffered a horrible nightmare. In it, he was in darkness, surrounded by clicking. He couldn’t see anything, didn’t know what the clicking was, but it terrified him. In the morning, he noticed his newest praying mantis had fallen from its spot on the display board. He carefully returned the mantis to its spot. Over breakfast, he accused his mother of going into his room and causing the mantis to fall, but she denied it.

The next night he had the same dream. In the morning, two mantises were on the floor. Enraged, the boy yelled at his mother, and demanded she confess to messing with his collection. She said she hadn’t done any such thing. That afternoon, the professor came by the house to ask, in person, one last time to borrow the collection. He told the boy that so much good could come of this simple favor. The professor’s studies would be used to help the insects that the boy obviously loved so much. The boy shut the door in the man’s face.

That night, he had a hard time falling asleep. He was so angry that his mother had messed with his collection, that this man thought he was entitled to it. His collection was his and his alone. He’d killed every one of those insects himself. They belonged to him.

He finally fell into a fitful sleep. No sooner had he drifted off, than the nightmare began again. Pitch black, the boy could see nothing, but there was the sound of clicking, clicking, clicking. A new sound arose, the thrum of insect wings. With a thrill of horror, the boy felt the bristly legs of a cockroach run up his bare arm.

He sat upright, and felt an avalanche of insects roll down his body. He was blanketed in them. He wanted to yell, to scream for his mother, but then he found they were in his mouth, choking him. Wake up! he wanted to yell at himself, Wake up! And that’s when he realized–he was awake.

In one moment, as though on a prearranged cue, the attack came. Those that bit, bit, those that stung, stung, those that had no weapon, smothered the boy, crawling into his eyes and ears and mouth.

The next day, at breakfast, the boy’s mother wondered why he hadn’t come down for his pancakes. She went upstairs, opened the door. The room was in perfect order. The boy’s insect collection hung in straight lines on the walls, his room tidy, his bed so neat it almost looked as though no one was in it.

The only thing amiss was the boy himself–he was dead, his eyes and mouth frozen wide in an expression of sheer horror.

Sometimes, when my dad told this story, the insects attacked the boy with the pins, causing him a million tiny stab wounds. And at times the mother would find all the insects down from their displays, littering the floor and covering the boy. My dad liked to switch it up occasionally.