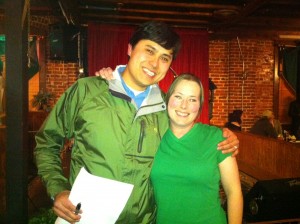 Me, Winning. (Best caption I've ever written on this blog, I'm telling you what.)

It’s been a banner few days for me.

I won the Story Slam at McGhee’s, taking home a sweet gift certificate for dinner for two, complete with app/entree/dessert/drinks. Winning food! How awesome is that?!

The next day, I won poker, taking home a sweet twenty bucks. My last hand was an ace-high straight, and my hands were like that all night.

And then, I finally got to the bottom of my shoulder injury, and, yay! No surgery for me! When I got this news I was floating all day long. I was so, so relived.

All of this left me feeling pretty glorious, especially the stand-up win at McGhee’s. Evan, his mom and I had gone one night a couple months ago, stumbling across this open mic contest. I watched and listened, and thought, with much modesty and humility, I could totally win this.

And I totally did.

People asked me if I was nervous, or commented that it took bravery/courage/guts. My family though, they knew the truth. Giving me a stage and a microphone is like giving a kid a candy bar. Thing is, my mother was a dancer and my father used to go by the name, “Freddy the Fire Eater.” He’d do tricks at parties with a mouthful of lighter fluid and a match. Performing is in my DNA.

So, you’d think I’d be on cloud nine, but I’m not. To be honest, this shoulder thing has got me down. I tried sorting it out today, and I realized I’m getting old. Not because I got injured. I’ve been injured plenty over the years. Concussions galore, broken toes at horse shows, broken back thanks to a jumping fall, bursitis in my hip from running, tendonitis in my right wrist that formed a giant, rigid bump that creeped people out when they looked at it. (So, you know, there was a plus side there.)

But this shoulder thing is the first injury I didn’t want to play through. Partly, that’s because it hurt in a way I found disturbing. Partly, because it always hurt. The bursitis would flare-up and then go away entirely, the shoulder was always letting me know it was there. And when the shoulder got angry – I’m not going to lie – it hurt pretty badly. Bottom line – I didn’t want to mess with it.

Which isn’t like me. Growing up a horse girl, you’re inordinately proud of your battle scars, of your lack of judgment. You brag about things like, “I fell off and got a concussion but then I went into the championship class anyway and I won!” (I did this, FYI, back in the day.) Or you start riding a month after breaking your back because you have Regionals coming up and you know where your priorities stand. You certainly never stop to think things like, “Maybe I shouldn’t try to lift this giant weight over my head,” you just see if you can.

And the thing is, despite whatever injuries came my way, I was always sure I’d bounce back, or that it wouldn’t make things worse to play through it. Now, I’m not altogether sure I will bounce back, and I definitely don’t want to play through it. Which is tough, because a big part of my self-identity is wrapped up in my willingness to say, “it’ll be fine,” and “I bet I can do more.”

One thought on “A Week Made of Win”