…but you wouldn’t know it from the Love’s Embrace Kay Jewelers ad that’s been playing every five minutes in anticipation of Valentine’s Day. Or, as many know it, Singles Awareness Day. They also played this puppy before Christmas. Not everyday Kay Jewelers forks out for a rain machine, so they’re getting their money’s worth. 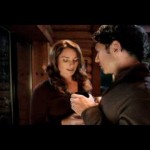 Woman receiving a pendant that captures the comfort found in each other's arms.

The 30 second spot begins with a mountain cabin in an electrical storm. A man and woman watch the storm from the window. There’s something not quite right about the guy. A little bit of smarmy, a little bit of mock turtleneck, a little bit of purposefully unshaven, I don’t know, but it adds up to a whole lot of not right.

The man is given the unenviable task of delivering the line: “In all the years we’ve been coming here I’ve never seen a storm like this.” Not even Marlon Brando at the height of his powers, let alone this guy, could bring this line to life. It is dead on arrival.

And then, it happens.

A crack of thunder and lightning.

And the woman spooks.

Do you hear me, people? The woman spooks. In a whirl of fright she spins away from the terrifying lightning and into the arms of smarmy guy. Okay. Here are a list of things that spook at electrical storms:

Please note adult women was not on the list. Not even ALL dogs are on that list, only some dogs. I’d like to think that if a good percentage of dogs have the maturity to handle a situation, we would go ahead and presume that adult women would also share this fortitude.

After the woman has been forced to spook into smarmy guy’s arms, she must then listen to him say, “I’m right here,” and yes, the line is imbued with the sort of condescension you’ve already come to expect from this commercial. He then adds, “and I always be.” Again, NOT EVEN BRANDO. So many hands were dirtied in the creation of this thing! No one is free from sin — not the writer, director, smarmy guy, the ad campaign team, NO ONE. Not even our leading lady, who, so far, has managed to bring a certain je ne sais quoi, a certain elan, to this sad endeavor, leaves unscathed.

After enduring these many humiliations she must deliver her one and only line. Now, I may be projecting, but when she gazes up into smarmy guy’s face, I swear I see a look in her eyes, a look that says, “kill me now. I’ve just been forced to spook, whirl into a smarmy’s guy’s arms, and now I must deliver my line, ’cause Mama’s gotta pay the rent.” And she does. She says, “don’t let go. Ever.” NOT EVEN BETTE DAVIS– okay, no, I take that back. Bette Davis could make anything work.

Meanwhile, the narrator informs the man, “now you can surround her with the strength of your love.” You know, it wouldn’t be so bad, if hadn’t we already been treated to the spooking, the condescension, the smarminess, but delivered at the conclusion of that nonsense it just sounds like so much chauvinism.

And in case you’ve been lucky enough to avoid it, here’s the spook in action.

P.S. Apparently this ad took heat back in November because it struck a lot of people as feeling like a slasher/horror film. I think that’s giving this guy way too much credit.