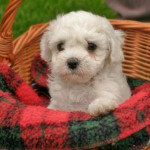 I think this is the seventh day in a row that I’ve opened the front door to discover a basket. Inside that basket, nestled into a fuzzy red plaid fleece, is a Toy Poodle puppy. The puppy has Joey Lawrence’s hair from the 80’s and his name tag reads Justin Bieber. Every day I close the door, hoping he finds some other family to live with, but the next time I turn around, there he is again! Universe, you may have become confused, but Toy Poodle puppies have no sway over me. I do not want a Toy Poodle puppy, I will not ever want a Toy Poodle puppy. Please take your Toy Poodle puppy and put it somewhere else.

Yes, I did say the exact same thing about the female Chinese Crested Hairless that you insisted upon dropping off, not only at my doorstep, but in my car, at other people’s houses that I happened to be at, at the gym. I didn’t want her either, and seriously, Universe, you stacked the deck against her when you named her Lady Gaga. Who wants a Chinese Crested Hairless in the first place, let alone one named that? 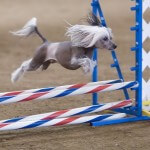 Lady Gaga performs at the Grammys.

Yes, yes, Universe, it’s true. I did eventually bring her inside and she became part of the family. What can I say? Paparazzi broke me down and Bad Romance did me in.

But that’s not happening with this Justin puppy. And I mean it.