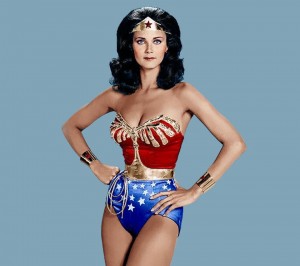 I was wicked obsessed with Wonder Woman as a kid. Felt appropriate to make mention of that here.

So, I have some thoughts to share about the He for She campaign. (I’m kinda sick and sort of feverish, so I am not even going to try to write this well. Heads up on that. Just going to bluntly express some ideas.)

When Emma Watson spoke of her childhood, it resonated with me. Much like her, I wasn’t limited by my parents or school or culture. When I was in about the second grade, I told my dad I wanted to be a wide receiver in the NFL. God bless him, my dad didn’t squash that dream. I remember that occasion so vividly, and his, “Well, anything’s possible” sort of reaction. Even though, in that case, it clearly wasn’t. But the feeling that anything was possible was an important one, and infectious, so that when my dreams shifted to something more doable, but still difficult (film school and life as a professional writer) I carried that energy with me. Similarly, my mother embraced by tomboy nature. She never tried to force a more feminine way of being upon me. She accepted me for who I am, as I am. Just as importantly, my grandfather, who could tend toward mean, tough, and chauvinistic, would tell me that I could be the first female President of the United States. That’s a whole heck of a lot of empowerment I was gifted with, and I thankful for all of it.

It saddens and angers me to think of little girls whose natures are squashed because who they are doesn’t fit into their parents preconceived notions. Be they more feminine or more masculine than what is wanted – it’s important to note that sometimes familial pressure goes the other route, too.

And herein lies part of my issue with what feminism has become.

As a kid, I heartily identified with the word feminist. And I still do with its base definition. But as Emma pointed out in her speech, it has become an unpopular word. Here’s the thing – the reason why it’s become unpopular isn’t simply because the world is filled with jerks who don’t understand feminism. It’s a mix of factors – from jerks who are threatened by true equality (and screw those guys and girls) to feminism being a word applied to behavior I find pretty appalling.

Here’s an example of such behavior.

Recently, I’ve had multiple male friends deal with charges of “threatening” a female co-worker. I am familiar with these cases, and in each instance, the woman was simply told her project wasn’t good enough. She was given tough criticism and she couldn’t take it. To be fair, I blame this behavior not just as a perverted form of feminist thought, but also on the belief that everybody is a precious snowflake these days.

I cannot really explain to you how angry this situation makes me. I love my people and I am protective over them. When I’ve watched dear friends spend decades building their careers, through conscientious effort, hard work and dedication, and then to watch some twenty-something twit wander in and – because of hurt feelings and never having been told “no” before – come close to wrecking everything my friend has built…the rage, you guys. All of the rage. These are good men. Men I know well. Men who self-identify correctly as feminists, in that they believe in equality between the sexes. Equal pay should be a reality. As well as an equal ability to handle the job at hand.

The first time this happened, I was surprised. I’m not surprised anymore. Now it’s something I expect. When a certain sort of twenty-something female doesn’t get what she wants at work she goes to HR and says she feels threatened. (Doesn’t matter if her boss is male or female, but if he’s male, that gets added to the complaint. It is a very mercenary sort of selfishness at play.) And here’s the thing – as angry as I am over the potential impact on my male friends, I am equally angry over what this does to women who are legitimately threatened. That is something I’ve lived through, and frankly, it goes down as one of the very worst times in my life – to feel threatened by a male boss and to work for a company who will not help you. No woman should ever have to deal with that. Because I’ve dealt with the real McCoy it adds to my anger to see these women issue complaints over honest critique of their work.

So here’s the other part of my complaint. Emma Watson makes a strong point about how men should be free to be themselves – sensitive and not controlling, unaggressive, etc. Which is 100% true. Men should absolutely feel free to be themselves. But what if who they are is aggressive and tough? Emma makes one mention of men and women both needing to be free to be strong. One mention. (Though to be fair, I was heartened by many aspects of Watson’s speech, including the fact that her father’s role in child raising is not as valued as her mother’s.)

Right now in the first world, we are in this cultural whirl of female empowerment. Check out this Pantene commercial, which is definitely on the money, this viciously manipulative trap of a commercial by Always, which still succeeded in making me cry (screw you, Always!), and this ever present campaign to raise a horde of superwomen bent on taking over the universe. Each of these things individually are fine. Put them together and it’s all. so. freaking. much. It’s everywhere. It’s stifling. And it has absolutely nothing to say to the men of the world.

Where are The Mighty Boy campaigns? Where are the commercials empowering men to be men? Look at the movies we make today. You don’t see the Gregory Peck as Atticus Finch roles. Where are the Jimmy Stewarts as George Bailey? The true man – strong, authentic, imbued with both integrity and feeling – is an archetype we’ve lost. As a culture, we’ve split men into two camps – emasculated suburbanites and psycho aggressive NFL types. We’ve lost the middle way for our men. And Lord knows we’re going to need them, once all those Mighty Girls grow up and takeover the universe.

Here’s the thing, you guys – a strong woman must have an equally strong man beside her. We are bent on creating a new breed of strong woman. Equal attention must be paid to raising a similarly strong generation of men. Right now, we don’t know what that means as a first world society. We have a clear vision of what the woman of the future should look like. No such image exists for boys. As Emma rightly points out, we won’t have true equality until men are free to be men. My contention is that we need to relearn just what, exactly, a man should be.

Even more to the point – I think we need to figure out what a good person is, period, and strive toward that as a society. Because that is an umbrella that covers us all – all genders, all races, all ages, all financial statuses – I feel that too often our emphasis on division does nothing but deepen our divisions.