Many moons ago, when I started this blog, I thought out in advance a sort of governing code of ethics. I do a lot of ranting, a lot of mocking. There were some ranting stories I wanted to tell, but I felt uncomfortable with them because they were stories about regular joes. Ultimately, I decided I would rant about public figures, Rolling Stone magazine’s various lists, and I’d tell stories where I am the goat, but I would never write a negative story about a regular joe.

And then I met Blake. 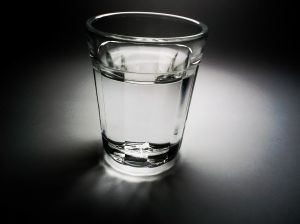 You want this? Can't have it.

Blake is a server at an airport restaurant. Ursula (who recently turned 90, by the way) and I went to this restaurant while we were waiting for Evan’s plane to come in. As it turned out, his flight got delayed, which was convenient, as we were at this restaurant for about a month and a half.

We arrived for an early dinner and the restaurant was close to empty. On the menu was a french dip sandwich, and Ursula shocked me by telling me she’d never had a french dip with au jus. So we decide to both order the french dip. Now, it took us awhile to come to this decision, and I start looking around for the waiter who’d seated us. He is oddly absent. (Hint, hint, this will become a theme.)

During the conversation wherein Blake informs us we’ve actually time traveled back to late 80’s Soviet Russia, where there is little food and even less logic, Blake starts to give off a real punk kid kind of vibe. I didn’t like him from the first but now I really don’t like him. Before he leaves we ask for glasses of water. He’d successfully delivered cups of coffee when we first arrived, back when we were young and innocent. Ursula has dry mouth really badly, a relic of her past fight with thyroid cancer, and it’s super hard for her to eat without water.

Ursula and I settle in to wait for our food. Several months pass. Ursula turns 91, and it’s sad because no one is there to help celebrate. Finally, finally, finally, Blake returns with our food. “We really need water,” I say. And then Blake says this, “I’ll get to it when I can.” I then watch him as he cleans off dirty tables, seats people, takes orders, and generally does everything he can do other than get our water.

Two enormous African-American men sit down behind us. They remind me tremendously of Grizz and Dot Com from 30 Rock. They sit in silence, both absorbed by their iPhones. After a certain point, I swivel around in my chair so I can watch for Blake unemcumbered. It’s been a long time since my last sighting of the elusive Blake, and I don’t want to miss a chance to glimpse this most rare species. When they see me turn around, the two men say, “If you want anything, you best just go get it yourself.” I take it they are regulars.

And there he is! I’ve spotted him! Blake is approaching and I’m ready to reach out and nab him. But another woman gets him first, saying, “We’ve asked for our waters three times now.” Blake raises his hands angrily and says, “It’s going to be awhile.” He leaves, and the woman and I exchange murderous looks. I think about forming a cabal to jump Blake and pummel the water out of him. Because, really, it’s all about the water hate for Blake. He will consent to bring you food, even coffee. But water? The hell are you thinking? Asking for water! IT’S BENEATH HIM. And why do all this people want water, anyway? WATER IS FROM THE DEVIL.

At this point, Ursula has choked down her chicken tenders without water, and I’ve eaten my sandwich. I just want to get the hell out. As he walks past, intent on ignoring us, I shout that I want the bill. We wait for about another six weeks.

He brings us, simultaneously, the bill and two waters.

I hope that it goes without saying that the bill was filled with errors.

One thought on “Dear Blake”