Previously, BOTASTIC was known only as Bo. This was before I renamed him. BOTASTIC is so much more descriptive. Here is a list of things BOTASTIC did for me and my cohorts for the Cooper River Bridge Run: 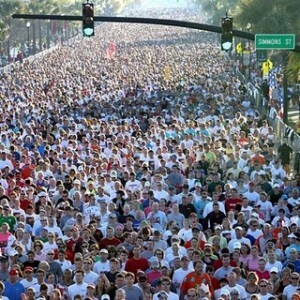 Imagine if they were all brain eating zombies.

And let me tell you, it’s a process. With 40,000 runners and who knows how many people running bandit, the Cooper River Bridge Run is, in many ways, an ordeal. To the credit of the City of Charleston, things ran smoothly. That said, with so many people, had it not been for BOTASTIC I am sure we would have run into plenty of headaches.

One thing BOTASTIC could not shield me from was the mind numbing cold. It was so. unbelievably. cold. I don’t know what the temp was, but it was a long, slow, cold walk to the start, and a long, slow, wait at the start for the race to begin. And I was dressed to run. I was to later learn I was destined to be cold the entire day. Little did I know the dreamed of warmth was never going to happen for me. Oh, Charleston, land of a million blistering suns, why the surprise freeze?

The other thing BOTASTIC couldn’t shield me from was my own stupidity. I woke up feeling dehydrated, so I drank tons and tons of water. When the clock finally struck 8am, I had to go. BADLY. Like a herd of cattle the crowd bumped and pushed and plodded through the start. About a half mile down the road, BOTASTIC spotted a gas station. “Let’s duck in here!” he suggested, and we saw a couple of other people doing the same. We told the rest of our group we’d catch up and ran over to the store.

It was blissfully warm. And jam packed to the gills. I got in line. It was moving at a glacial pace. BOTASTIC suggested getting some coffee. That sounded fantastic. And then we saw some Hostess. BOTASTIC went for a fruit pie, and I had my eye on some cupcakes. I hadn’t had Hostess Cupcakes in years (they’re hard to find in the South), so let me add this to the bullet list:

BOTASTIC and I noticed the gal in front of me was wearing a Clemson shirt. I was wearing a Clemson hat. I discovered she lived in Clemson and worked in the admissions office there. “Oh,” I said, “you must know GOOCH!” I would explain who Jennifer Gooch is, but it would take a whole ‘nother post. Let’s just say she’s an icon. The gal, whose name I never did get, exclaimed, “I LOVE GOOCH!” I said, “who doesn’t love Gooch! Did she tell you about the time we almost burned her house down last Christmas?” The gal laughed. “Oh, you must be a poker girl!” As I took a sip of coffee and a bite of Hostess I said, “indeed I am!” Why, this was turning out to be the most pleasant race I’d ever been in! Just then the girl looked at her phone. “Somebody just won the race,” she told us. “A Kenyan in 28 minutes.”

Finally, we made it to the head of the line. As we rejoined the “race” a stab of fear hit us. There was the straggler van. On an empty street. Frightened we’d be forced to ride in the van of shame, we hustled our bustle. But we didn’t run. We had beverages, man. We reached mile marker one. It had taken us 57 minutes to get there. 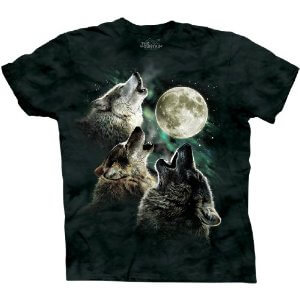 A gift fit for a king.

We upped our pace dramatically. In fact, we started catching people and passing them. By the time we reached the bridge we were back in the thick of the race. Along the way, BOTASTIC kindly took my empty coffee cup and carried it a couple of miles, until we reached a trash can. BOTASTIC is a true Southern gentleman. At the end of the Cooper River Bridge Run I set a personal best in terms of my mile times. No, I never actually ran. I beat my personal best running time. At a walk. Awesome.

Later that day I discovered the three wolf moon t-shirt, of which I knew BOTASTIC to be a devotee, and of course got it for him. Not an extravagant thank you, to be sure, but one I knew he’d appreciate. Luckily, he did not already have it.

Next year, my plan is to actually run. But, you know, that’s assuming I don’t hear the siren call of a bathroom, coffee and a Hostess cupcake again.