When you work for a large corporation, and you’re in the service industry, and you do things like teach people how to ride horses, it’s important to be CPR certified and generally up to date on how to handle medical emergencies. The company I worked for had a gentleman whose job it was to keep us in line and ready for action. He was a nice man and good at his job and very, very passionate about it. He was also a possessor of verbal tics. He had exactly three:

An example sentence would be, “ever so gently, check for a pulse. If you’re not sure about the situation, don’t be bashful, get on the horn and call 911.” In a two hour seminar I guesstimate that he would say each of these phrases about 100 times. As a result, I am no longer super sure about my CPR steps (though I’d gladly give it by best shot if I needed to), but I do know that I should proceed ever so gently, not be bashful or hesitate to get on the horn.

One day I was driving to work whilst happily chatting with my friend Axel. It was a beautiful, sunshiney morning, and I was arriving late for some reason I can’t remember. As I approached the gatehouse I saw a woman sprawled out on the asphalt. “Oh crap,” I said to Axel, tedium in my voice. “There’s this guy whose always setting traps for the employees. I gotta go deal with a fake heart attack right now.” And it was true. Fake heart attacks and other emergencies would sometimes lay in wait to test our responses. With great annoyance I pulled over and got out, ready to do the required shtick.

Which is when I saw blood.

Upon closer examination, a biking accident victim revealed herself. She had been speeding along when a guard stupidly closed the automatic gate directly in front of her, forcing her to brake suddenly. She went over the handlebars and things were not good. They were not good with her face and they were not good with her hands. Not good at all. She was clearly in shock. Her friend and I began ministering to her. It so happened that I kept a clean white sheet in my 4Runner at all times for Elvis transportation purposes. Luckily for this lady it had just been washed. I covered her with the sheet. The bright sun was blinding her, sweat was falling into her eyes, so I covered her completely. At any point did it occur to me that she looked like a dead body? No, it did not.

The guard, who had caused this mishap to begin with, said he couldn’t get a hold of her husband. I sped off to their home to find him. When I arrived, I found the hose still running. He 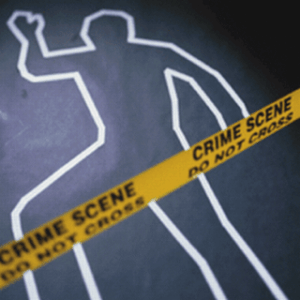 had been washing patio furniture, but was gone now. I turned off the hose and headed back towards the gate house. By the time I arrived, an ambulance had taken her to the hospital. My day continued on without further incident.

A few weeks later the lady and her husband visited me, graciously thanking me for doing nothing more than stopping to help. (I didn’t do much, after all.) The poor lady was still dealing with nerve damage in her hands. It was then that I learned that the call the husband received was as follows. “You should come to guard house. Your wife has been in an accident.”

As he came around the final bend in the road, he did not see an injured woman under a doggie travel blanket. He saw this–>

I was at a complete loss for words. Innocent though it may have been, I was complicit in giving this man one of the greatest scares he’d ever know. Ultimately, I decided not to be bashful and ever so gently said, “I’m sorry it wasn’t a plaid stadium blanket.” Later, I got on the horn and told Axel about it.