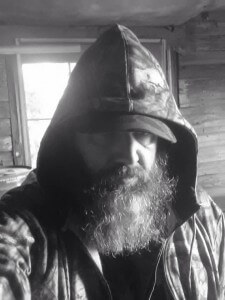 The selfie Tom sent me. I was sitting in the airport when I got this and I jumped. I JUMPED, YOU GUYS. And that's the character I wrote! And the man I know! Still scared me.

In 2010, I wrote a blog post called A Killer Named Skinny. Long story short, my first novel, Truth Be Told, featured a serial killer named Paul. I’d written Paul mostly out of the ether, only very vaguely based on a couple of people I knew. In terms of voice, appearance, etc. he was created out of whole cloth. When my friend Axel Gimenez and I went to film a book trailer for that novel, my friend Dan Dinger introduced me to his buddy Drue Yates, aka Skinny. It was a profoundly bizarre experience – much like a Stephen King novel, it felt as though the author had given life to the creation. Skinny WAS Paul. Voice, appearance, charming personality – the whole bit. It FREAKED ME OUT, YOU GUYS. Ultimately, Skinny became a dear friend of mine, and to my knowledge, he’s never murdered anybody.

Fast forward to January 2013. I’d written my third novel, Ruthless, and was in the process of my first revision. Only, it wasn’t so much a revision as it was an addition. I was adding on to the antagonist, dubbed Wolfman by the protagonist. Getting to the bottom of Wolfman’s psychology was an arduous process, to put it mildly. At the end of January, I started doing stand-up comedy. I began with an open mic in Greenville, SC. A group of guys who called themselves No Expectations Comedy ran the show. Charlie Grey was immediately welcoming, as was Michael Robinette and Craig Holcombe. Jason Farr was polite. And then there was Tom Emmons.

Tom Emmons was not warm or welcoming or polite. He was the opposite of all of those things. In fact, my first reaction to Tom Emmons was precisely the same as my first reaction to Peter Exline. Which, in retrospect, made perfect sense, because I know of few people who are more similar than Tom and Peter. Wildly different in some ways, but remarkably similar at the core. However, where I warmed up to Peter almost immediately, I decided to steer clear of Tom indefinitely. Especially because, much like Skinny, Tom FREAKED ME OUT. Why? Because he WAS Wolfman. I couldn’t believe it had happened twice, but it had. Tom was so eerily akin to Wolfman, I wanted to verify that he had existed prior to my writing of Ruthless.

So, I wound up spending two and a half months staring at Tom and thinking, “I want to make my book into an independent feature film and have THAT guy star in it.” I had never had a conversation with him, but I knew, beyond a shadow of a doubt, that he could play the role magnificently. Eventually, Tom and I became friends, and he became my stand-up comedy mentor. (Sort of. I think at this point he’s given up hope I’ll ever write a punchline.) Around that time, I’d made my additions to Ruthless but really no revisions of any significance. I didn’t know where to go with the novel from there and abandoned it. When Tom learned I was a writer, he asked to read what I was working on. By that point, Ruthless had been abandoned for at least a couple of months, but I sent it to him, thinking it wasn’t likely he’d much care for it.

He loved it. You want to know how I knew he loved it? In one reading, he’d memorized all of Wolfman’s dialogue and called me IN CHARACTER.

Which I thought was the greatest thing ever. This is why Tom and I are friends. Because I write creepy things and then Tom goes and makes them creepier, and I’m like, “Dude, I am wicked impressed right now. I thought that was at maximum creepy, but you really bumped it up a notch.”

I asked him what I should change and he encouraged me to go ahead and send it out to agents. So, I did. 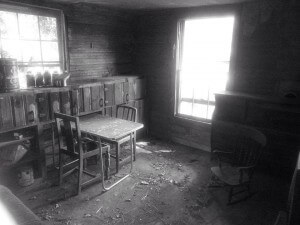 The interior of Wolfman's cabin and the other pic Tom sent me while I was stuck in the airport.

And then came a long wait. I thought about making a book trailer again and talked to my filmmaker friend Jeff Martell about it. I mentioned Tom, who Jeff knew as a stand-up comic. He said that he could see it, and that we’d just know that Tom would need some takes to nail it, given he was a comic, not an actor. I was like, “No, dude. You don’t understand. He IS Wolfman.” (In case you’re wondering, I do say “dude” just as frequently as you’d imagine, given this blog post.)

Tom and Jeff and I wound up working on another project altogether, one oriented in the comedy world, and the briefly mentioned book trailer never materialized.

Time passed, I got an agent, the super awesome Mandy Hubbard, and she promptly sold it to Simon & Schuster. Months went by and it came time to start promoting Ruthless. And then boom – it occurred to me – WE COULD STILL DO THE BOOK TRAILER! The first time around, I used my book trailer to land an agent. This time around, I could use it for the purpose God intended – to sell books! How exciting! I got permission from Simon & Schuster to film my own book trailer, cast my niece Alyssa Duwe as Ruth, called Jeff, who then recruited John-Paul Newtown as Director of Photography and we were good to go.

And we were good to go, because we already had the perfect location – on Tom’s property. Wolfman’s cabin is probably the third most important character in the book. As it so happened, Tom has the perfect replica sitting on his 40 acres, just a few yards from his house. Again, just for emphasis, Tom Emmons IS Wolfman.

While I was caught up in travel problems in New York City, Tom cleared out a room in his cabin and did an amazing job of dressing the set. He then consulted with me about Wolfman’s look, and put together the perfect wardrobe. I appreciated all of this a lot, especially as I was supposed to help with the effort. Instead, I sat in an airport and received amazing still photos of what Tom had created in my absence. As always, I’d come up with something creepy, and he’d bumped it up a notch.

The day of the shoot arrived and everything came together beautifully. I had no doubt Tom would deliver, and he did – in spades. I was a little worried he’d act Alyssa off the stage, but she wonderfully held her own. Tom has a huge force of personality, so it was no small thing for a 14 year old to go toe-to-toe with him. As always, Jeff was the consummate professional, and John-Paul did an awesome job capturing the scene.

For me, the greatest moment of the day was during Tom’s first full take. He’d perfectly found Wolfman’s voice – the inflection, delivery, the sadistic joy and angry remorse – and as he went through his lines the space filling the cabin got quieter and quieter, as Alyssa, Jeff, and John-Paul and I absorbed the performance. It was awesome. Not only because of what was happening in the present, but because it was exactly as I knew it would be, back when I first stared at Tom in January of 2013 and thought, “I want to make my book into an independent feature film and have THAT guy star in it.” I still think that, by the way. In my not-so-humble opinion, there’s nobody who could it better than Tom Emmons.

2 thoughts on “A Killer Named Tom”