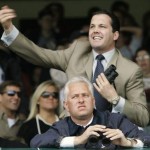 The Todd. He's the one in front. Looking particularly Toddish.

In years prior I’ve sent out an illustrated e-mail to friends and family who don’t keep up with the Derby to give them a shorthand version of what stories to be aware of and what horses to watch for. This year’s version will be even shorter than usual. Here it is: BLLLAAAAAAAAAAHHHHHHHH…….

I just don’t see the usual compelling Derby story taking shape. However, in the absence of a compelling story, there is a dominant theme. And that theme is dominance.

One trainer, one horse and one stable will dominate this year’s Derby with numbers if nothing else. WinStar Farm could set a record for number of entries with four – American Lion, Endorsement, Super Saver and Rule. Meanwhile, dominanting the training ranks is Todd Pletcher, who could saddle 15 horses for this year’s Derby. Okay, not 15. But a lot. I’m not even sure how many. Like WinStar, he may also set a record this year. Known amongst my friends as “The Todd,” an homage to the Scrubs character who couldn’t be less like the oh-so-stiff Pletcher, the super trainer has led over 20 horses to the saddling paddock on the First Saturday in May and has never won. (He has won a Classic, though, with the memorable filly Rags to Riches in the Belmont.) Among his charges is the favorite, Eskendereya, who will dominate the bettors’ wallets. In the end, the 2010 Derby may boil down to a very simple story indeed – is Eskendereya the real deal? If he is, then we may have a compelling Triple Crown after all. 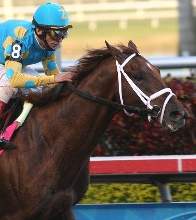 Along with the standard 126 lbs, Eskendereya will be saddled with The Todd's losing streak and Zayat's karma.

Undefeated on dirt, Eskendereya destroyed his competition in the Fountain of Youth and then the Wood Memorial. A heavily muscled colt, he does not give the impression of stamina, but he’s bred to go the distance and had no problems with a 1 1/8 miles. This reminds me of another chestnut colt, whose name begins with S and ends with ecratariat, but it’s poor form to ever make a comparion to the Meadow Stable star. He’s ridden by The Todd’s mainstay jockey, the excellent John Velazquez. Unfortunately, he is owned by world class moron/chauvinist Ahmed Zayat. Pay attention. He will say at least one egregiously stupid and/or insulting thing before the Triple Crown is over. Zayat, by the way, was the idiot who led an actual conspiracy in an attempt to block Rachel Alexandra from entering last year’s Preakness. When caught he threw the new guy (Mine That Bird’s owner) under the bus and then started talking about Eight Belles, because PETA didn’t have enough fun with that the first time around. Thanks, Zayat. That was awesome.

But Eskendereya is not the only horse in the race! Let’s look at two other strong contenders!

Sidney’s Candy – Named after Jenny Craig’s dead husband, Sid – although I’m not sure if he was already dead before the horse was named or what – Sidney’s Candy is the a very quick son of Candy Ride. To be honest, I don’t find Sidney’s Candy very inspiring. I think this is likely due to his name being Sidney’s Candy. But, my prejudice against his name aside, the horse has done nothing wrong. He is trained by Southern California veteran conditioner John Sadler and ridden by the wunderkind Joe Talamo. Last year Joe was on the Derby favorite, I Want Revenge, but the horse was scratched the morning of the race. Joe is back this year on a horse that should be third choice. One thing about Sidney’s Candy – he closes. And if you’re going to win a Derby, you need a horse who can close. It would be no surprise to see the roses over Sidney’s Candy’s withers this year. 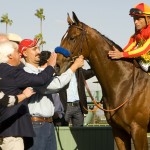 The very kind and loving Lucky.

Lookin’ At Lucky – the most inappropriately named horse in the field. Trained by silver-haired comedian Bob Baffert and owned by Bob’s old friend Mike Pegram (the team that brought you 1998 Derby winner Real Quiet), Lucky has a talent for finding traffic trouble. He’s a hard trying horse and always finds a way to keep coming. He is ridden by Garret Gomez, a former superstar who has made a successful comeback after an extended hiatus (it took awhile for him to put every last dollar up his nose). Gomez has not only reached his previous level of success, he has surpassed it. It has taken him a tremendous amount of work to get sober and work his way back to the top – it would be nice to see it rewarded.

One Final Note – There is another place in this year’s Derby where the theme of dominance comes to the fore – this year’s edition is overwhelmingly dominated by horses who win on the lead. The first turn is always crowded, but this year I wouldn’t be surprised to see some horses floated 8 wide. A supposed knock on Eskendereya is his need for the lead. Frankly, I don’t see it. I think he’ll be happy to stalk. That said, if there’s one horse in the race who has shown he can come from anywhere it’s the supremely versatile Lookin’ at Lucky.

I’ll be making additional posts as the Derby gets closer to highlight intriguing longshots, horses who are relishing the Churchill surface, and other odds and ends.

5 thoughts on “Your Handy Dandy Guide to the Kentucky Derby, Part I”