This last Friday I ventured forth with friends and husband to Abbeville, SC. Things to know about Abbeville:

Of less historical significance is the fact my dad has a “cabin” there. It’s not really a cabin, per se. It’s a double-wide. But this only adds to its charm and allure. The cabin sits on the shore of Lake Secession. Pop Quiz: Lake Secession was named in what year? A.) 1842 B.) 1899 or C.) 1940. All those who picked, C.) 1940, get a piece of candy. I’m not sure when my dad got the cabin. We’re going to say 1999 and call it a day. Point is, it’s been in the family awhile, and I’ve come to consider myself a connoisseur of the various delights of Abbeville and its environs. An amateur connoisseur, to be sure, but an enthusiastic one.

Which is why I was so delighted to experience something not only new in Abbeville, but something fanfreakingtastic and new in Abbeville. I went with my Pot Belly Deli Writing Group friends Lisa and Kim and Evan to a play, First Baptist of Ivy Gap, starring fellow writing group member Tamara. Beforehand we went to The Village Grill for dinner, which was pretty fanglorious, both in terms of food and company, and then we watched the play. (Southern-based friends, you must go! The entire cast is excellent, but I think Tamara brought the most sparkle.) Afterward, we were supposed to go to the Mexican restaurant for margaritas. “Order me a top shelf margarita,” Tamara said, “and I’ll be along in a minute.” 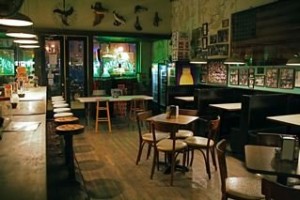 This is what is on the other side of The Rough House time portal.

Off we went, only to find the Mexican restaurant closing down. There was only one other open option in town: The Rough House. Alternatively, The Roughhouse. They liked to switch it up. Sometimes it was spelled one way, sometimes another. Why go with consistency in spelling when you can have variety? I mean, sometimes I go by Cary or Kerry or Kari or Zanzibar Buck-Buck McFate, depending on my mood.

We opened the door of The Rough House and stepped through a time portal. On the other side we arrived in 1932. For reals. Except, did they have styrofoam in 1932? I’m not sure if they did or didn’t, but The Rough House sure did, and the mild-mannered British gentleman who ran the bar served the “top shelf” margarita in styrofoam. With salt. (Top Shelf=Jose Quervo.) It was then that I knew I’d found a new home for my heart, and that my heart would be safe there forevermore. 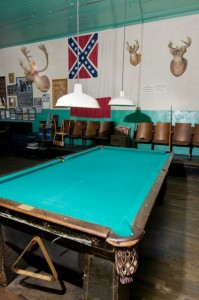 It turns out The Rough House was built shortly after the, as they refer to it, “War for Southern Independence.” (For when you’re feeling like “The War of Northern Aggression” just sounds a titch too hostile, but you’re still opposed to plain ol’ Civil War.) The bar was established in 1932. Whether it was a speak easy during those last few months of Prohibition I don’t know, but I hope so. Because that would be awesome. It was probably just a pool hall. And it remains a pool hall to this day. Their tables were purchased in 1936. I AM TELLING YOU. TIME PORTAL.

In addition to every piece of furniture, the ornate bar, and the pool tables, there were other things stuck in time there. Quite literally, in fact. And by that I am referring to the large number of dead things forever frozen to their spot on the wall. Bobcat, deer, mountain goat, turkey, elk, and loads of fish adorned the walls, while they themselves were adorned with dust. Lots and lots of dust. To be fair to The Roughhouse, they were awfully high up. I’m sure it’d be a pain to clean. It was sad, though, that their whiskers were all about a half an inch in diameter. Whiskers aren’t supposed to be that thick.

Also, The Rough House caters. Hot dogs. Exclusively hot dogs. Yep, caterin’ hot dogs. (How many people would you need to be feeding before it would make sense to farm out the job of hot dog preparation?)

My favorite moment at The Roughhouse, and it’s hard to pick just one, when there were so many, has to go the accidental hoof grab Lisa made. To back up, at The Rough House, there are things. Just kinda lying around. Sorta on tables and chairs, sorta not. It’ s a huge space so not much gets in the way of anything, it’s just sorta bordered by things. Lisa, whose back was to the wall and assorted things on tables, got up to use the restroom. She placed a balancing hand on a thing on a table. She took a step, stopped, looked, and said, “It’s feet! I just grabbed feet!”

She had, in fact, just manhandled a coat rack made out of deer legs. She proceeded to get a case of the heebie-jeebies. I can’t imagine why. I would hope it goes without saying that when she returned from the bathroom we’d placed her purse and cell phone on top of the deer leg coat rack. Those are the kind of shenanigans that are de rigueur at The Rough House.

ADDENDUM: It has just been noted by Tamara that it was not a deer leg coat rack, but a deer leg GUN RACK. As previously stated, I am but an amateur connoisseur of Abbeville delights.

8 thoughts on “The Rough House”