August 24, 2006 May 30, 2011
In the 1964 Christmas classic, Rudolph the Rednosed Reindeer, Rudolph winds up on the Island of Misfit Toys because none of the other reindeer would include him in their reindeer games.

So too with Ginger, a small bay Morgan mare. Upon arrival at the equestrian center, Ginger was placed with the other trail horses, but they refused to accept her into the herd. Their refusal was violent, lasting, and Ginger found herself a home in the main barn, where she was befriended by the twenty year old Shetland pony Sugar. Sugar is adored by all horses who meet her, as she provides unconditional love to all she meets. And so Ginger made her first friend.

Ginger, having made this friend, was extremely protective of her, challenging any horse who came near Sugar. To say that Ginger was quirky is an understatement. By the time I arrived at the barn, Ginger had a serious attitude problem. We used her on trails only at last resort, as she would pin her ears, toss her head, and otherwise express her displeasure. She was, in short, an extremely unhappy horse when I met her. I wanted very much to see what I could do with her, but my manager at the time pronounced that Ginger was her project horse, and forbade me from working with her.

Two months passed and the manager threw up her hands – Ginger’s problems had only worsened. On a day the manager had off, I took Ginger into the round pen. Many people have heard of “horse whispering” or natural horsemanship. The idea is simply to work a horse in a round pen until they relinquish the leadership role to the person. Hugh Jenkinson watched as I worked Ginger that first time. Ginger was so angry, had so much venom built up inside her. Hugh kept voicing his concern as she raced around the ring, expressing all of her rage, expressing it by kicking out at me, rearing in front of me, striking at me. Horses don’t require words to scream.

Eventually, it was all out of her system. She came over to me, quietly, her sides heaving as she gulped for air. I talked to her, and she put her forehead to my chest, and I stroked her ears, listening to everything she had to say. We stayed like that for a long time. Just as horses don’t require words to scream, they also don’t require a voice to cry.

From that day forward I worked with Ginger everyday. Almost immediately, she came to love these one on one sessions. Looking back over the last two years at the barn, I can think of no memory more gratifying than that of Ginger, racing towards me as I called her name, coming from the far back of the pasture flat out, a blood bay blur against the green grass. She ran to me knowing no treats were in my hand, knowing that a training session awaited, a session with both discipline and approval. Ginger, however, was an extremely intelligent mare, and very little correction was needed. She learned quickly and drank up the praise as fast as I could pour it on. Ginger had made her second friend. 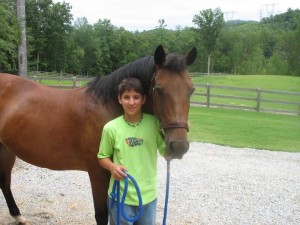 Over time Ginger’s attitude continued to improve, and eventually she blossomed into an excellent trail horse, a horse who found a niche carrying children. Adults could wear on her nerves, and she remained a quirky soul with definite opinions, but no horse was more trustworthy with a small child on the trail. She understood vulnerability, and she was protective of it. She also understood mistreatment, and she had no tolerance for it. I never put a rider on Ginger that I suspected might be rough on her.

After working day in and day out with the rest of the trail horses for two years, the decision was made to put Ginger in with the herd a few months ago. To Ginger’s delight, this time she was accepted. She was low man on the totem pole, to be sure, but she was a part of the group. Her pride in this fact was evident, and we all celebrated with her when she earned the right to eat with everyone else. She was finally allowed to play the reindeer games denied her for so long.

People and horses either click or they don’t. Ginger and I clicked right off the bat. In my first week at the barn, I found Ginger scratching out her tail. Whatever was itching her was ferocious, as she was rubbing herself raw and bloody. Alarmed, I went to her head and said, “don’t move, Ginger, I’ll be right back.” I ran to the utility room to grab ointments and cleanser and ran back. Ginger remained frozen, right where I left her, waiting for the help that I had promised. She had been blessed with a gorgeous, thick, glossy black tail. I felt it was a travesty that half of it was gone, and made it a special mission to encourage it’s re-growth.

Ginger’s tail was halfway grown out when she died on Thursday, August 24th, of a severe bout with colic.

Ginger was a beautiful bay Morgan mare, possessed of good looks galore and a personality that defied categorization. She could lay her ears back and deliver nasty looks with the best of them, but she could also curl her head and neck around you, looking into your eyes with hers, impossibly large and black, slowly blinking in loving contentment. I understood her, and she me. We both understood the Island of the Misfit Toys, and that mutual understanding brought us both a great deal of peace and happiness.