Since we last chatted a lot of things happened. Halloween, Thanksgiving, Christmas, New Year’s Eve, and I finally finished the first draft of my wip (work in progress), which most definitely remains a wip, as I’m only too aware of how underdeveloped the antigonist is, how unearned elements of the climax are, how a few ideas are brought up and abandoned, like unfinished stories in a conversation. Some of these things will be easy fixes, some of them will not. And there are two long, deserty stretches were things get real boring, for a real long time. Not even really boring. They get real boring. That’s how intense the boring is.

Also, this book, or rather, this wip, it’s a strange little misfit creature. It’s got a lot of stuff in there that I think a lot of people are going to find alarmingly odd. It’s all stuff I like, or rather, find fascinating. Freaks and demonic possession and the nature of evil and the nature of good and Irish people and Percherons and books and 19th century poorhouses and lunatics and how one goes about getting better. I even put in one horse show. I wasn’t going to put in the horse show, but then I was like, screw it, it’s my book, I’ll put a horse show in it if I want to put a horse show in it. If it doesn’t work, I can always take it out later. It just seemed self-indulgent, the horse show. Although it does serve two important plot points, so it’s not gratuitous.

And like Liz Lemon, I want to go to there. There being, specifically, the National Horse Show as held in the second incarnation of Madison Square Garden in New York City. The National Horse Show, now in Lexington, Kentucky, remains a big deal today, but then it was even a bigger deal, in the same way all horse events were a bigger deal before the advent of the motor car. And here’s the thing, back in the day, those people liked to decorate with flowers like nobody’s business. We don’t do flowers today like they did then. Probably an issue of an expense, because the effect was so amazing.

I actually can’t find any of the pictures I want to find (typical) that shows the flower mania at its full extent, but here’s some other shots that give an idea of what it was like. Click here to see the first picture full size. 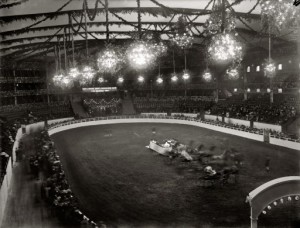 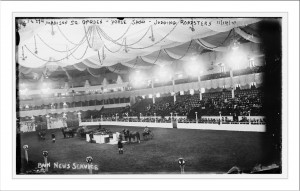 National Horse Show, 1909. They went with ribbons this year. 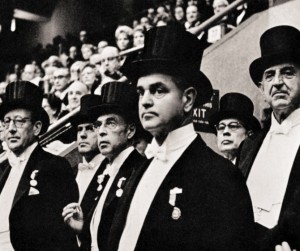 What people wore to the National Horse Show. It was a white tie event.

So, long story short, I put it all into the book. And by book I mean, work in progress.