I mentioned in Part 1 the potential for a historical win for Kathy Ritvo, who trains Mucho Macho Man. 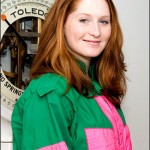 The Girl Who Was on Fire: There is another woman who could make history in the Derby – Rosie Napravnik. Rosie rides Louisiana Derby winner Pants on Fire. Rosie herself is on fire these days, having destroyed the competition at the Fair Grounds in New Orleans. Red-haired and fierce, she reminds me a lot of my good friend, National Champion Becca Prichard. (Am I right or what, people who know Becca?) Rosie also is very smart, articulate, decisive, and gives a great interview. I’d really, really like to see her win. In part because of headlines like this. (If you don’t want to click on the link, the headline reads: Woman jockey rides Pants on Fire to historic victory in Lousiana Derby. Firstly, “Woman jockey?” Is that like a “woman driver?” And secondly, it’s TOO LATE IN THE GAME for this to be news. Seriously, Julie Krone won the Belmont a bazillion years ago. Chantal Sutherland won the Santa Anita Handicap this year. It’s time to move past this phase, and a good way to do it would be for Rosie to win the Derby, give a bunch of rad interviews, and remove the novelty surrounding “woman jockeys.”) 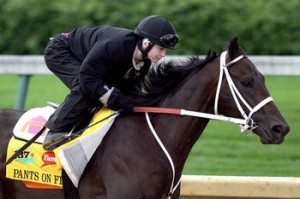 Pants on Fire is a good horse, too. As a horse person, I love his looks, especially his beautiful, big eye. He’s been a Rodney Dangerfield horse this year, never getting enough respect. I’ve always liked him, and while I’d be surprised if he won the Derby, I wouldn’t be crazy-surprised. This is what Rosie had to say about his win in the Lousiana Derby:

“He ran with as much heart,” Napravnik said about Pants On Fire, “as a horse can run with down the lane…. He just dug in, and he really finished with all his heart. I don’t know where he’s going,” said Napravnik, who rode Pants On Fire for the first time, “but wherever it is, I’d like to go with him.”

As it turns out, Pants on Fire is going to the Derby, and Rosie is going with him.

Comma to the Top: It pains me to say this, but I don’t think Comma has any place in this year’s Derby. I don’t think he wants any part of running a mile and a quarter. But I have to put him down here because I love this horse. This horse tries with all of his heart, every single time. He doesn’t always win, but he wins a lot. His trainer had said he wasn’t going to go to the Derby, but then Comma gutted out an extremely close second in the Santa Anita Derby they decided to go. I know it must be hard to fight off the Derby Fever, but I have concerns about this decision. 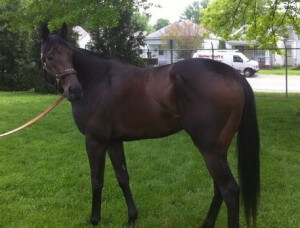 Comma to the Top, plain bay all over, but completely adorable.

Also making me unhappy is the presence of Patrick Valenzeula on his back. Patrick won the Derby back in the 80’s on Sunday Silence. Now 48, Patrick has battled a lifetime of drug addiction, as well as innumerable suspensions for reckless riding. Straight up – I don’t trust Patrick Valenzeula. I hope that as time goes on, he’ll have enough days of clean living and clean riding that it could be said he’s truly turned his life around. Right now, I’m not there yet with him. If I were queen of racing, I would have given him a lifetime ban several strikes ago. I’m not normally so judgey about addictions, but in racing, lives, both human and equine, hang in the balance of good decisions. One wrong move and everybody’s going down. This is why tempers flare. Here is mild-mannered Calvin Borel going after equally mild-mannered Javier Castellano. Calvin shouldn’t have done this, of course, but when your friend almost kills you and your other friends, you get a little angry. Had the offender been Patrick instead fo Javier, I think Calvin would have actually knocked him out.

The one positive thing Patrick’s famous for is milking early speed. He knows how to win wire-to-wire, and that’s how Comma goes – he goes to the front and he stays as long as he can, and he has so much heart. And if, so help me God, Patrick Valenzuela abuses Comma’s heart, I will hunt him down and Calvin Borel him into next week.

Top o' the morning to ya! Says Master of Hounds

Classing Up the Joint: Master of Hounds. He finished second to the outstanding filly Khawlah in the UAE Derby. A lot of people were super impressed by him, I was more impressed by Khawlah, who, after all beat him. Master of Hounds is from the mega-powerful Irish stable Coolmore, trained by the mega-successful Irish trainer Aiden O’Brien. Like I said, I wasn’t super excited. Lots of times horses who ship in don’t do so well in the Derby. And then I saw Master of Hounds get off the van, with a disturbing amount of confidence, and my, is he a fine looking horse. When he strode away toward the stables, looking around him, it’s like you could hear him say, in an Irish accent, “Oh, so this America? I haven’t seen it since I was a foal. It will be delightful to CRUSH THEM ALL UNDER MY HOOVES.”

Two Quick Entries: And finally, I want to mention Decisive Moment and Twinspired. These horses are going to be loooooooooooong shots. But Twinspired is great at picking up checks. Not at winning, but at picking up checks. I love his consistency and his try. He’s definitely not the most talented horse in the field, but I wouldn’t be surprised if he got third. (He’s also a lovely dappled grey.)

Decisive Moment is a lot like Comma, he’s built for shorter distances. But he is another horse with a lot of try, tons of heart, and a horse who picks up checks. In the Jean Lafitte Stakes at Delta Downs he pulled off a pretty amazing win, having led throughout, then was passed in the stretch, then surged back to take the victory. That is a very rare thing for a horse to do. Plus, he has been training really well at Churchill Downs. And, imo, he has fairy tale black stallion looks, which never hurts. In entertaining news, his trainer Juan Arias, exercises the horse himself. WHILST SMOKING. Who does that? Juan Arias, that’s who. 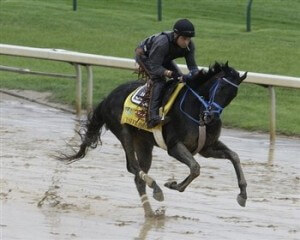