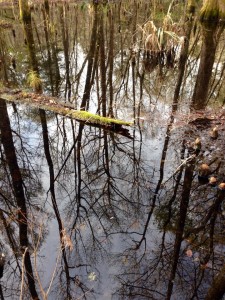 The swamps of Caw Caw.

Yesterday, I got to spend time with my sister at the French Quarter Inn, which has come to feel like home to me, thanks to my sister’s work trips. If you ever get a chance to stay there, do so. It is lovely. It’s the kind of hotel with bathrobes and turndown service and bottomless mimosas in the morning, and a glass of champagne as you check in.

Driving away, I wound up in morning traffic. We were parked for quite awhile, waiting to get on 17. To my right, somebody was blaring country music, so I looked to see. She was blonde, pretty, lots of make-up, quintessentially Southern. About 25. She was listening to The Dixie Chicks song, “Wide Open Spaces,” and she was singing along. Angrily. Very, very angrily. There was a Tupac-ian sort of righteous anger about her rendition. It reminded me of when I used to sing along to that same song on my commute, seven years ago now. I think my version was more “desperate sadness” than “righteous anger” but I thought, “I feel you,” and, “I hope your day at work goes well, beautiful girl.”

After that, I decided on a whim to go to Caw Caw County Park. It costs a dollar to get in and the men who worked at the park seemed so happy somebody had showed up. They told me I was the only one there and to enjoy my visit. I walked for two hours without retracing my steps. I did stop for about 15 minutes waiting on an alligator to resurface, but then I read they can spend up to two hours underwater and I gave up. I walked through swamps and marshes and forest, saw innumerable birds and animal tracks. I also came across a sign explaining the history of Caw Caw Park.

When I first arrived here in Charleston, I paid a visit downtown and met an awesome girl working the counter of a fudge shop. Her name was Shaniqua and we instantly clicked. She asked me what I was doing here and I told her I was in town for a few weeks to write. Shaniqua paused and said, “How’d you get the privilege to do that?” I said, “I have no idea. It’s better than I deserve.” Her question keeps coming back to me. A huge percentage of the answer is, through grace. Grace meaning, the unmerited favor of God. I had nothing to do with the circumstances of my birth, nor have I had anything to do with a huge number of other variables that swung things my way. And make no mistake – it isn’t comfortable for me to say this, but the truth is – I live my life my way. It isn’t comfortable because I see so many people who post on Facebook about how they hate Monday and I know that feeling so well. When I worked at the Cliffs, every day my commute was a 40 minute long anxiety attack. I’ve been there. I’m not there now, though. Now I have a hard time remembering what day it is. While I was walking around Caw Caw today, feeling grateful for my good fortune, I pondered the question of “How I got the privilege to do this,” and I came up with some answers in addition to simply being in the right place at the right time. Qualities I possess that aid and abet the life I live.

Once upon a time, I was having breakfast with my good buddy BK and he referred to me as, “risk tolerant.” I’d never really thought about it, but it’s true. I could find myself in a bad financial situation very quickly. I just don’t care. “It’ll be fine,” is the Adams Family motto. “Serenum erit,” in Latin. They are words I live by.

I don’t worry about things I can’t control. I’m actually on submission right now. I have books that may or may not sell. “Submit and forget,” is the actor’s mantra, but I’ve adopted it for the writer’s life. I’ve done the best I could with them and if they sell, Yay! and if they don’t, it’ll be a disappointment. But most days go by without me thinking about it.

I handle creative rejection well. If I bomb on stage, it’s a lesson learned. If somebody doesn’t like my writing, I’m okay with that. This ability to handle rejection has nothing to do with any innate quality I possess. Instead, its thanks to four years of USC film school and the den of vipers that were my classmates. I will be forever thankful for the daily beat downs I received. I love you guys, if you’re reading this. You vicious SOBs.

I don’t own many things and I’d like to own even less. Part of why I can afford to have as much freedom as I do is because I have a very small house with a very small mortgage. My car is old and paid off. I spend money on food and drink, but that’s really about it. My animals tie me down, but if I didn’t have them I’d sell my house and go full hobo in a second.

I am at peace with solitude. It is rare that I feel lonely, but I almost always feel alone. These are two different things, although I get that the latter sounds scary, and for many people, it is probably an undesirable state of affairs.

My parents taught me to follow my bliss, so I do that. It’s not easy to be disciplined when you’re self-employed, but if what you’re doing doesn’t feel like work and it brings you joy, it’s a heck of a lot easier.

The thing is, there are a lot of people who either want – or think they want – more freedom in their life. The truth is, you can have it if you want it. But there are prices to be paid. It isn’t complicated, but simple rarely means easy, and in this instance it definitely does not. Ultimately, the choices I’ve made lead to a lot of freedom, but little security. In my opinion, security is an illusion anyway, so it’s a deal I’m happy to strike.

2 thoughts on “How’d You Get the Privilege to Do That?”