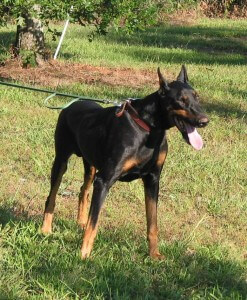 In June of 2004, my then newly wedded husband was working in the garage when he heard the sound of heavy footsteps approaching. He pivoted around in his kneeling posture in order to see who had walked in. Instead of looking at a person, as he had expected, he found himself eye to eye with a truly enormous Doberman Pinscher. The dog began to cry, and then laid himself flat out on the concrete. Evan came and fetched me, and that was the moment I first met Elvis. He was extremely thin, with open, festering wounds around his neck and between his shoulder blades. He was passing blood, and a lot of it. We gave him water and the only cooked meat I had on hand – a pound and a half of thin sliced frozen Virginia ham. He swallowed it in one bite. After a good deal of confusion and chaos involving animal control (who wanted to put him down because he was a male Doberman), animal rescue groups and neighborhood rumor, I eventually found Elvis’ rightful owner. He lived around the corner, and he was severely stricken by alcoholism.

Because I could not legally wrest the dog away from him and have Elvis live to tell the tale, I decided on Option B. I approached him one day when he was outside his home, and said in a cheerful voice, “I love your dog! I was wondering if you might be willing to sell him to me?” The man was grateful, as he assumed I was coming to complain about Elvis’ wanderings through the neighborhood. I gathered that the man did love Elvis, in so much as he was capable of loving anything through the haze of his disease. I learned that he sometimes disappeared for long stretches, and when that happened, Elvis didn’t eat until he escaped to find his food on his own. That’s when the man wrapped the chain around his neck, and around his chest, and criss-crossed it between his shoulders. He said that the last time he returned, to find Elvis so thin and covered in sores, he was devastated. But he also was not yet ready to sell him. “Well, how ‘bout I help you take care of him?” I said. The man brightened considerably and took me back behind his house to show me where Elvis lived. “This,” he said proudly, “is Graceland.”

Graceland was a screened-in porch so filled with detritus there was barely home for Elvis to lay down. As soon as he saw me the giant dog arose, his face nothing but a smile, his whole body wriggling in excitement. The man showed me where the food was kept, where the water was, and for three months I went to Graceland three or four times a day to walk Elvis and feed and water him. I got him a collar and a leash, better dog food, and took him to the vet for a preliminary exam. My vet diagnosed him with a severe parasite infestation, but unfortunately, it was more than that causing him to pass blood continuously – he also had cancer. That August, his owner told me that he wanted me to have Elvis. I asked how much he wanted for the dog, but he replied he wanted no money, adding, “I only have one condition – that you keep his name Elvis. Elvis was the King of Rock ‘n’ Roll, and Elvis is the King of Dobermans.” And so it was that Elvis, King of Dobermans, moved one block down the road and became our dog. 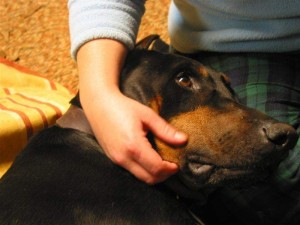 Elvis, recuperating after one of his many surgeries.

During this time Elvis was in the prime of life. His weight quickly soared from 85 to 105 pounds. His energy, strength, and endurance were extraordinary. Tremendously tough, nothing slowed Elvis down. He had his first surgery to remove ulcerated tumors from his colon. They said it would take several hours before he came around – by the time the short car ride was over he was ready to go on a walk. He had another surgery, and another, for his horribly bad teeth, for additional cancers and tumors, he went through heartworm treatment and swallowed what must have been hundreds of pills. He became a favorite at the vet’s office, where he serenaded the staff with his signature “singing” – as they called it.

Throughout it all, Elvis’ joy for living was unparalleled. This joy permeated his being, and made him a very kind dog. Despite his experience with starvation he was never possessive over his food, and this was a dog who was quite passionate in his love for kibble and doggie treats. He was always kind, always a gentleman, and accepted his difficulties with grace. As our vet would always say, when his hand was halfway up the rear end of a truly powerful killing machine, palpating for tumors, “I’m so glad you’re a good dog, Elvis.”

Unpleasant medical procedures notwithstanding, Elvis saw life as one gigantic party to be enjoyed. Being a clever dog and quite the Houdini, if he ever heard the far off sounds of a college party, he would find a way to escape and join it. I will never forget the calls I received. “Um, your dog’s at my party? Take your time getting here, though. He’s really sweet!” “Your dog is at Spittoono. He’s eating all the children’s hot dogs.” The greatest lure of all was Spittoono. Where else can a dog find a live band, fried Twinkies, and hot dogs to steal all in one place? I took to writing in Elvis’ voice in notes to my friends. Elvis’ greetings always began in the same way, “Hi! I’m Elvis!” It was just the way he said hello to the world.

As time progressed, and Elvis added deteriorating hips to his long list of ailments, he began to slow down. He did not pull on the leash anymore – although he would still strive to figure out a way to make his walks longer – an Elvis trademark. No matter what he had going on, he was out to live life, and live it thoroughly. Last summer, Elvis developed an abscessed tooth. Nothing unusual, and we’d been down that road before. But then what had appeared to be an abscess grew and grew, and it became apparent that the inevitable had finally occurred. On October 13th 2007, Elvis was diagnosed with bone cancer in his jaw. We knew that his propensity for growing tumors would one day catch up with him. But when it finally did, it still felt like a surprise. Elvis had been cheating death for years. It turns out death always keeps an ace up its sleeve.

Our vet expected us to put him down within three or four days, as the cancer was extremely painful. He sent us home with painkillers to buy us time to say goodbye. Elvis, it turned out, would not be denied one final minor miracle. One day after his diagnosis I discovered him leaping up and down in front of the back door, his black head bobbing into view with excitement over his favorite combo – dinner and a walk. As soon as the painkillers reached his system he had rallied, and for two wonderful weeks he was as bright and bold as he had ever been. He rode in the car, he went on nature walks, he made new friends, he ate as much as he wanted, and life was a joy.

And then, on October 25th, it wasn’t anymore. The pain had returned, and this time there would be no rally. Our vet, who had tended to Elvis so carefully for so long, came to our house. He gave him a sedative, and explained that Elvis would be quickly dropping off to sleep. And we stroked his beautiful face, deformed by the tumor and the nerve damage it had caused, and told him what a good boy he was. Time passed. And more time passed. And then Elvis sat up, brightened, and looked like he was thinking a walk sounded like a good idea. Our vet walked back over, saying, “Elvis, I gave you enough sedative to put a 190 lb. dog under a surgical plane of anesthesia. You should not be awake right now.” I said, as I said so many times over the course of Elvis’ life, “he’s the toughest dog that ever was.”

Our vet administered another shot, and then Elvis did drift off to sleep.

In the weeks after Elvis’ death I felt restless. I kept thinking I needed to feed him. Kept wanting to check on him. Eventually this abated, and life returned to something like normal.

My husband and I recently got a kitten for his mother. She has a grown cat who we felt needed a friend. As we took the kitten home she took to purring in the carrier, and upon arrival, she immediately made herself at home. She dashes from me to him, and from him to me, purring and loving up a storm. Thanksgiving gatherings left her unfazed, as she went from guest to guest to spread her love and joy. “Hi!” She seemed to say, “Hi! I’m a Kitten!” in a very Elvisian manner. We then introduced her to the cat who would be her friend, and he tried to eat her.

And so now, as I write this, a little creamy colored ball of fluff with blue eyes and an uncomplicated, joyous heart, purrs beside me, as unlike from the giant Doberman as she could be, and yet, in the matter of spirit, beautifully similar.