This last Easter I had the honor of attending my goddaughter’s baptism. It was a beautiful occasion marked by good friends, family, lovely weather, a wonderful service and a horrible case of the church giggles. The church giggles is a malady that can strike during any solemn occasion; its purview extends far beyond the boundaries of the religious. This, however, was a classic case, its presentation an example of the most common symptoms. The disease caught hold when the father of my goddaughter turned to me and began a sales pitch on why I should leave the Catholic Church in favor of the Episcopalian. I responded, “thing is, Protestants are so evangelical.” “Not Episcopalians,” he replied. “Really?” I said. “Seems to me you’re being evangelical right now.” At which point he emitted a loud guffaw into the silent sanctuary. His wife turned to us, her eyes wide in a “what the what?” expression. And that was all she wrote. The rest of the service was spent in paroxysms of laughter. Sure, we bent our heads in a faux expression of earnest devotion. But we weren’t fooling anyone. The prayerful rarely possess shaking shoulders. 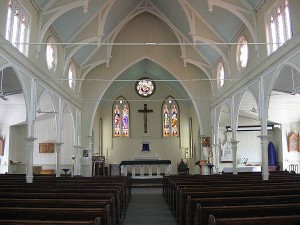 The greatest comedy club on earth!

This experience took me on a journey of remembrance of other cases of the church giggles. The very first I can remember came at Holy Family in Auburn, WA. The service was nearly empty. My mom was at home with my little brother, then just a baby. My dad nodded at a parshioner a few pews ahead of us and said, “check out Wolfman over there.” The name was apt, as the guy was flat out FURRY. My sisters and I lost it. In retrospect, I feel badly about laughing at the hirsute gentleman. He was wicked furry, though.

I had a relapse during my sister Cindy’s wedding. My mom was charged with the task of reading this passage: “Look! Listen! There’s my lover! Do you see him coming? Vaulting the mountains, leaping the hills. My lover is like a gazelle, graceful; like a young stag, virile.” The problem with this case of the church giggles is that I was a bridesmaid, standing in front of the entire congregation. Father Jack, who I love and adore, but who also has a temper, casually walked over to me, smacked me in the back and said, “PULL IT TOGETHER.” This was impressive, as he pulled off the ALL CAPS pronouncement through clenched teeth. I proceeded to partially pull it together. It was the best I could do in the face of the line, “like a young stag, virile.”

More recently, I attended church with my sister Becky at Prince of Peace in Greer. The church is shaped like a cross, and we were over in the right hand wing, which is incidentally right next to the pulpit. Our pew was behind the pulpit steps, giving us an up close and personal view of Father Steve’s coming and going. It was as Father Steve was exiting that Becky and I simultaneously noticed a vein protruding from Father’s Steve temple. But this was no normal vein. He looked like he was about to stroke out. As he passed in front of me, no more than two feet away, I said the following: LOOK AT THAT VEIN ON HIS HEAD. I turned to Becky and her eyes were like saucers. I then said this: DID I SAY THAT IN A REGULAR VOICE? In answer, Becky bent her head in faux prayerful devotion and started laughing hysterically. I sat there, also laughing hysterically, marveling at my own stupidity. Not only did we have the church giggles, but they were contagious. The family behind us, who had heard the entire thing (how could they have missed it, given my yelling?) also got the church giggles. They spread like wildfire throughout our entire section.

In conclusion, I shall steal a line from Benjamin Franklin (in a comment originally made about beer) and repurpose it: The Church Giggles are proof that God loves us, and wants us to be happy.