I was born on Halloween in 1976 and my parents named me Carrie.

If I ever write a fan letter to Stephen King, that will be the first sentence. With such a beginning in life, some things are just destiny. (I’ve always wondered – Carrie opened in theaters on Nov. 3rd, meaning the promos had to have been out there before I was born. Is that where they got they idea? Even subconsciously? If so, I am all for it.)

I rather think my interest in all things supernatural is in my nature, but it was definitely in my nurture, too. Our house was a natural home for ghost stories, we all enjoyed them, and Granny, my dad’s mother, grew up in a haunted house. A naturally gifted Southern storyteller, she’d regale us with her tales. She even told her stories to the girls at my 11th birthday sleepover. My Grammy, my mom’s mother, let me read a book, Mysteries of the Unexplained, whenever I came over. One day, she let me take it home. It remains one of my most prized possessions. My Uncle Robert was also a big contributor in the development of my interest in the supernatural. He gave me countless paperbacks about psychics and UFOs, and would call me whenever there was a special on TV about Bigfoot. My mom read Poe to me when I was little, and my dad would tuck me in at night to tellings of his very own stories, stories that would have made King proud.

So, really, pretty much everyone in my life encouraged my interest in all things dark, spooky, and mysterious. But there was another person, a person outside of my family, who had as great an impact on me as any of my relations. I would not learn his name until 2001. Until then he was known to me only as the Green River Killer.

I like to joke with my friends about being psychic. I am not, though. Despite my better than decent record with gender id’ing babies still in the belly. I like making predictions, I like to try to listen to my gut and pluck out a fact about the future, but it’s just guesswork. In all my life, I’ve only had one experience that felt profoundly psychic. And really, that’s all I can say – is that it felt psychic. Although I guess I can also say that it had a big impact on me.

By the time I was in the third grade the Green River Killer was everywhere. I remember driving down the Auburn-Black Diamond Road, not at all far from our home, and having a white house pointed out. “He dumped a body behind that one,” it was said. On the local news, tales of new bodies discovered would dominate the news cycle. The Green River Task Force was a term everyone was familiar with. Much later, I would board my horse at a farm, and would learn he’d dumped a body in the ditch next to my horse’s pasture.

I was profoundly aware of him, frightened of him, and fascinated by him. Who was this monster? And what had made him that way? There was also, in a weird way, a sort of pride. The whole country was watching us, our tiny, insignificant little neck of the woods. South King County wasn’t good for much, but we sure could grow ourselves a serial killer. Early on, I had a sense that creepy things grew in the dark, wet woods of the Pacific Northwest. I’ve never been to Maine, but clearly, Stephen King feels the same way about that state. But did Maine produce Ted Bundy, Keith Hunter Jesperson, Robert “William” Pickton, Clifford Olsen, Robert Lee Yates, Kenneth Bianchi, John Allen Muhammed and the Green River Killer? I didn’t think so. 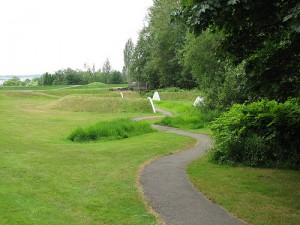 No, I don't believe there is a body here, in Earthworks Park. Besides, I already looked.

But on to the point of this post – my third grade nightmare about The Green River Killer. I am going to put it down here unedited, even though it features some silly, dream-like aspects. My dream began with me on my pony, Candy Cane, trail riding in Earthworks Park in Kent. Becky was there, on Rocky. At this time in my life, I had never been to Earthworks Park, but I’d seen it from the road. It is an urban park, and you cannot, by any stretch of the imagination, ride a horse in it.

Becky and I split up, and I rode Candy deep into the interior of the park. A thin band of forest encircles the green space, and I heard rustling coming from the trees. I dismounted, and walked in on foot. Silently, I approached the sound of the rustling. There, before me, was a man unloading a woman’s body. She was dead white, nude, and turgid. She was laid out on black plastic, and I got the impression he’d carried her in wrapped up in it. He was now covering her with the plentiful fall leaves from the forest floor. Before my eyes, as though through time lapse photography, her body decomposed, down to her skeletal remains. Horrified, I stepped back. That’s when the man looked up at me. We locked eyes.

For the first and only time in my entire life, I woke up screaming. My parents fetched me from my room and I spent the rest of the night in their room. The next day, I felt it very important to draw what I had seen. In that moment, I believed wholeheartedly I had seen The Green River Killer. His face shape was distinctly oval, his hair straight and styled forward from the back. He wore a simple white t-shirt. There were two important details. His wore a cross around his neck and his utilitarian pants had so many pockets. I’d seen them before, but didn’t know what they were called. I described them to my mom. “Oh, those are painter’s pants,” she said.

Years later, my sister Becky and I took her daughter Courtney to Earthworks Park. I was a senior in high school, and it was my first time visiting the park. Eight years had passes since my nightmare, but it was as vivid as ever. I remember telling Becky about it as we strolled around, exploring. The park looked exactly as I had imagined it. To be fair, you can get an idea of it from the road. But the paths, the little bridges, the shape of the outline – it was all so perfectly familiar. It was an eerie experience, to put it mildly. 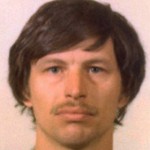 Another seven years went by. The Green River Killer was arrested. Now he had a name. Gary Ridgway. I instantly recalled my dream and my third grade police sketch. I went to my computer and pulled up the story. It looked like him. He’d been arrested at the Kenworth plant, where he painted trucks for 32 years. Paint fragments transferred to his victims wound up being an important piece of evidence. Gary Ridgway presented himself as a devout Christian, would read the Bible at work, go door to door evangelizing, and attended church.

All that said, wearing a cross is a common thing, and painter pants were popular in the 80’s, as was the hairstyle the killer had in my dream. All I can say is, it felt like a psychic experience. And, since that dream, and my Green River Killer-adjacent childhood, serial killers have infected my imagination. Gary Ridgway, and his distasteful brethren, live inside my mind and come out whenever I get to typing.

6 thoughts on “A Story About a Nightmare”