(Note: Names of the innocent have been omitted. The name of the not-so-innocent has been altered.)

In my latest blog post, I mentioned an “unfortunate incident” that left me ordering orange juice at W hotel bar. As I look back, it occurs to me that perhaps some good can come out of my misfortune. Perhaps, through an edifying narrative, and then a handy dandy list of tips, I might save someone from going where I went. While I cannot say, Picard-like, it was a place no one has gone before, I can assure you it is a place no one wants to go. So! Without further ado, here is a lesson from Aunt Scary for all the kids.

I shall begin slightly before the beginning. On Tuesday, I was certain I was coming down with the 24 hour flu bug everyone has been getting around here. But by the afternoon I’d seemed to have shaken it off, and by Wednesday, I felt 100%. This was good news for me, as my good friend was having her holiday party Wednesday night, and I’d been looking forward to it for some time.

Upon arrival I found my friends ensconced in the kitchen. Among them was my bosom buddy, Rat Sick. “Hey, Fat Tick!” I said, “What’s on offer?” My good friend explained he’d recently gone on a trip, and was making Bloody Marys with a Fabulous Foreign Twist. The other option was mulled wine. I love mulled wine, but it doesn’t love me, and I’m all about making smart choices. “Sign me up for one of those Bloody Marys with a Fabulous Foreign Twist, Flat Mick, and make it snappy!” 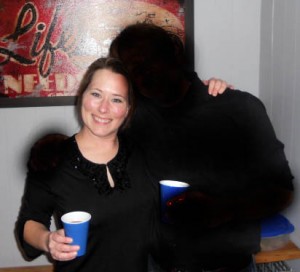 I enter this photo into evidence of me and my friend Bat Kick from the night in question. Please note how small those solo cups are!

As it so happened, Tatt Lick had these wee little solo cups, so small they were, like nothing I’d ever seen before. Moreover, my chum was only filling them three quarters of the way up. The Bloody Marys with a Fabulous Foreign Twist were spicy deliciousness, and the company was excellent. I chatted with old friends, made new ones, and everything seemed to be going splendidly. In retrospect, I can spot three warning signs that all was not as it seemed. Here, then, some advice from Aunt Scary for the next time you’re at a party.

(Note: While I only spun small to medium-sized men, I did make a good faith effort to carry around men from the 200+ bracket, it’s just I was unsuccessful in doing so.)

Despite all of the above, I still thought I was a-okay until I arrived home. It was at this juncture that my body suddenly went to high alert. “Mayday! Mayday!” it screamed. “We’re going down!” As this was not my first rodeo, I knew emergency evacuations were in order. I went to bed, stomach empty, thinking I was okay.

That night, I dreamt of being in a European plaza. Anthony Bourdain was there, and I wanted to talk to him. However, these beautiful clear glass coolers of fruit and herb-infused water beckoned to me. I drank glass after glass of orange water, lemon water, mint water… the water was so delicious I could not stop drinking it, I could not leave it even for a moment, and so Anthony Bourdain sat, untalked to, at a table mere feet away.

And so you can see how the eternal widsom of the physical self outweighs that of the conscious mind. I’d made a mistake, kids. I had not rehydrated. And so I woke up feeling as though death himself waited outside my door. I will not give you the details, other than to say, I lost four pounds, was sick until 2pm, and finally, with much rejoicing, kept down a single piece of toast at 3pm. But holiday parties wait on no man, and so it was that evening, my friends, that we set off on our two hour drive to the W Hotel.

To wrap up! Warning signs are: Over-weird-eating, Bragging, Carrying Adult Men. Once it’s too late: Rehydrate before going to bed, lest you miss out on a conversation with Anthony Bourdain. Hey, don’t say your Aunt Scary never did nothin’ for ya!