Recently, I told a young friend of mine about the glorious heyday of the Deep Thoughts by Jack Handey books. I loved those books. I assume most of y’all are familiar with them, but in case you missed them, they were short and sweet, with one deep thought per page. For example:

“To me, clowns aren’t funny. In fact, they’re kinda scary. I’ve wondered where this started, and I think it goes back to the time I went to the circus and a clown killed my dad.”

I could go on and on. I don’t know why those books, and books like them, have gone out of vogue. After all, our attention spans have only gotten shorter. I think they need to make a comeback, and I know the perfect vehicle to bring them back. And no, the answer is not Charlie Sheen. The answer is: 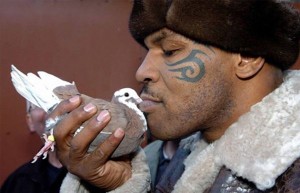 Some quotes from Iron Mike:

“I’m a dreamer. I have to dream and reach for the stars, and if I miss a star then I grab a handful of clouds.”

“I paid a worker at New York’s zoo to re-open it just for me and Robin. When we got to the gorilla cage there was one big silverback gorilla in there just bullying all the other gorillas. They were so powerful but their eyes were like an innocent infant. I offered the attendant $10,000 to open the cage and let me smash that silverback’s snotbox! He declined.”

“My main objective is to be professional but to kill him.”

“My power is discombobulatingly devastating. I could feel his muscle tissues collapse under my force. It’s ludicrous these mortals even attempt to enter my realm.”

“I feel like sometimes that I was born, that I’m not meant for this society because everyone here is a f**king hypocrite. Everybody says they believe in God but they don’t do God’s work. Everybody counteracts what God is really about. If Jesus was here, do you think Jesus would show me any love? Do you think Jesus would love me? I’m a Muslim, but do you think Jesus would love me … I think Jesus would have a drink with me and discuss … why you acting like that? Now, he would be cool. He would talk to me. No Christian ever did that and said in the name of Jesus even … They’d throw me in jail and write bad articles about me and then go to church on Sunday and say Jesus is a wonderful man and he’s coming back to save us. But they don’t understand that when he comes back, that these crazy greedy capitalistic men are gonna kill him again.”

“All praise is to Allah, I’ll fight any man, any animal, if Jesus were here I’d fight him too.”

“I’m the most irresponsible person in the world. The reason I’m like that is because, at 21, you all gave me $50 or $100 million, and I didn’t know what to do. I’m from the ghetto. I don’t know how to act. One day I’m in a dope house robbing somebody. The next thing I know, ‘You’re the heavyweight champion of the world.’ … Who am I? What am I? I don’t even know who I am. I’m just a dumb child. I’m being abused. I’m being robbed by lawyers. I think I have more money than I do. I’m just a dumb pugnacious fool. I’m just a fool who thinks I’m someone. And you tell me I should be responsible?”

“I’m on the Zoloft to keep from killing y’all.”

“Everyone has a plan ’till they get punched in the mouth.”

“I never saw my mother happy with me and proud of me for doing something: She only knew me as being a wild kid running the streets, coming home with new clothes that she knew I didn’t pay for. I never got a chance to talk to her or know about her. Professionally, it has no effect, but it’s crushing emotionally and personally.”

Ahhh…Mike Tyson. He’s got a strange sort of wisdom about him, but the surprising thing is, it’s a genuine sort of wisdom. I’d buy that book. Fo’ reals.

3 thoughts on “A Book that Needs to Happen”