This was originally written at the conclusion of my time in Team in Training.

O CAPTAIN! my Captain! our fearful trip is done;
The ship has weatherd every rack, the prize we sought is won;
The port is near, the bells I hear, the people all exulting,
While follow eyes the steady keel, the vessel grim and daring.

Okay, so, not directly applicable, and yet the Walt Whitman poem has been going through my head with all the tenacity of an 80’s pop song, and so perhaps placing it here will exorcise it from my mind. Yesterday was the day of reckoning, a blind date you can’t ditch and yet you know is going to last for hours and cause you suffering, you just don’t know how much.

Had the Myrtle Beach Marathon come at the end of November I would have been in fine shape. I was fit, mentally in the game, and ready to roll. But then there was a sickness, and then another sickness, and then, right there at the end, the massive implosion of my mental health as I quit my job. The moment that sums up this period of my life: jogging in Pendleton, crying. Woman runner passes me, presumes I am in the 10th mile of a marathon training session, gives me double thumbs up. I kind of nod in her direction, in a “let’s just go ahead with your version, and skip over the fact that I am on mile one and having a nervous breakdown.”

But then my dad talked to me and said, “what’s the worst that could happen?” And I answered, “I’d have to walk.” “Big deal,” said my dad.

And I realized that it wasn’t. What was the big deal in walking? Would walking mean I was a failure? Would walking take away from the incredible experience of having connected with all of you? Would all the dollars you donated be worth any less if I walked during the race? With all of that said, would I be willing to nearly kill myself in order to avoid the shame of walking during the race? The answer is yes, yes I would.

But I went into the race at peace with whatever the outcome would be. I went to sleep the night before at nine, happily snoozing away until my sister Cindy called me at ten, tension in every syllable. She had sick children on her hands, didn’t know what was going on, and knew she had to get up in six hours. As she drilled me with questions about the location of the start of the race, she sensed my drowsiness – “were you asleep?” she hissed resentfully. Ah, siblings. Love on top of love. Once we got Cindy’s situation figured out I went back to bed and woke up at 4:30, surprisingly chipper. Cindy, too, was a happy camper when I met her down in the lobby, and we had a good time driving to the start of the race, despite the circuitous route we were forced to take. We arrived literally two minutes before the start. The mass of humanity, 3,500 runners in all, created a palpable warmth – a welcome change from the 26 degree walk over to the starting line.

And then we were off and running. I said good-bye to Cindy. I only saw her for a brief moment or two before she disappeared into the crowd. In fact, I only saw everyone for a brief moment or two. No matter how much you want to believe that “what really matters is just doing it” it still sucks to have hundreds and hundreds of people sweep past you as though you were standing still. And run past me they did – old people, disabled people, heavy people, little people, big people, fit people and unfit people alike, all of them were faster than me. At least 3,000 people ran by me in the first mile. It was disheartening. It went on and on and on, and, knowing that the water stations were at every other mile, I determined that there must be mile markers only on the even numbered miles. And then there it was – mile marker one.

But I kept going, and listened to the sounds of the conversations around me. Everybody, it seemed, had a buddy. Two people behind me talked about textbook storage. “Teachers,” I thought. Four older gentlemen talked about how they were Larry, Moe, Curly, and Shemp. “Old friends,” I concluded. But my eavesdropping was distracted by a new, unexpected threat – people passing me at a walk.

Yes – people passed me at a walk. A lot of them.

At mile four I started to feel fatigued. My right hip wasn’t happy. I started thinking about the Cliff Shot energy gel I had in my pocket. I was going to take it at the halfway mark, and the station at mile six had water. Between mile four and mile six I began to hurt. My right leg, and everything that keeps my right leg attached to my body, was seriously unhappy. Volunteers, almost all of whom were elderly folks, rooted us on at every block. I thanked all of them, but I don’t think they know just what a service they provided.

And then people started passing me in wheelchairs. Their race started 30 minutes after mine. As we crossed one intersection a cop cheered a wheelchair athlete as he whizzed by. I couldn’t help but think, “what’re you cheering that guy for? He’s faster than the wind.”

In the fifth mile I became very concerned. I started thinking about my grandmother Francis, who died of brain cancer, a cancer that began as lymphoma, and my grandfather, John, who died leukemia. “Don’t go to the well yet,” I thought. “It’s way too early to start that.” On my toughest hills I think about my grandparents who died of leukemia and lymphoma. I mentally refer to it as “the well.” But I didn’t want to have to pull out that mental leverage over my body so early in the race. I wasn’t even halfway through, and already I was falling apart. It was around eight in the morning, and I concentrated on the ocean to my left and the volunteers to my right.

I took another gel boost, which turned out to be unadvisable as it made me nauseous. I didn’t tell Pat that, but I think she sensed it. So she told me about her son in college and her other son in Iraq, and about how he had just been sent to Baghdad after having been stationed in Okinawa. She told me about her student who had leukemia. He was in the 5th grade, and I could tell from her voice she didn’t think he was going to make it. And there was mile marker 11. We turned into the wind, and headed for mile 12. Pat asked me, “does your back hurt?” “No,” I lied. We ran into the wind for what seemed like eternity, and finally, finally, finally – there was mile marker 12.

This is the last mile I thought, I better enjoy this. I drank some water, which made the nausea come back. But really, I wasn’t doing too badly, all things considered. A little bit of a sore back and a little bit of a sick stomach – not bad at all. I picked up my pace a little and enjoyed the final mile – Pat took a picture of me running by the sign that said “turn left – finish line” and then she turned back to coach somebody else to the finish line. As she left I thought, ‘that woman was my guardian angel in this race.’

As I ran down the chute I felt pretty good, pretty strong – much better than I had felt from mile four to six. I came around the corner and saw Evan and his mom, Alice, waiting for me. Everyone else finishing at this point was walking, and walking very slowly at that. Evan told his mom that they should start checking first aid stations for me. Ye of little faith. While I cannot independently verify this, I’m pretty sure that I was the last runner to finish. A dubious accomplishment to be sure, but hey – it’s unique talent to be able to run that slowly. My final time? 3 hours and 25 minutes. 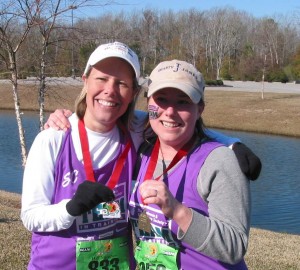 I totally forgot I put that sticker on my face. Huh.

I found Cindy at the Team in Training tent. We were anxious to get out of there. Especially Cindy, as I’d told her to wait for me, and she’d gone hypothermic in the meantime. Not surprising, given that she finished in less than two hours. My sister – she is wicked, wicked fast. And so we snapped this picture and went on our way.

And so our Team in Training adventure has ended. Cindy is already agitating for another half-marathon, and I suppose I am stupid enough to go along with that. I didn’t, after all, die, so I guess there’s no harm in going in for a second try at that.

While it goes without saying that the running aspect of this experience has been illuminating (you never know what you can do until you try), without a doubt the best part of participating in Team in Training has been connecting with all of you. It has been an incredible blessing.

P.S. As a little post script to this story – as soon as I found Cindy she told me our mom had called her right after she crossed the finish line. She said that at 8:20 I had popped into her mind, and she was worried I’d hit a wall and wasn’t doing well. 8:20 is right about when I’d reached bottom and had gone to my mental well. And then found my guardian angel.

You can never underestimate the power of a mom. Or of dead grandparents.